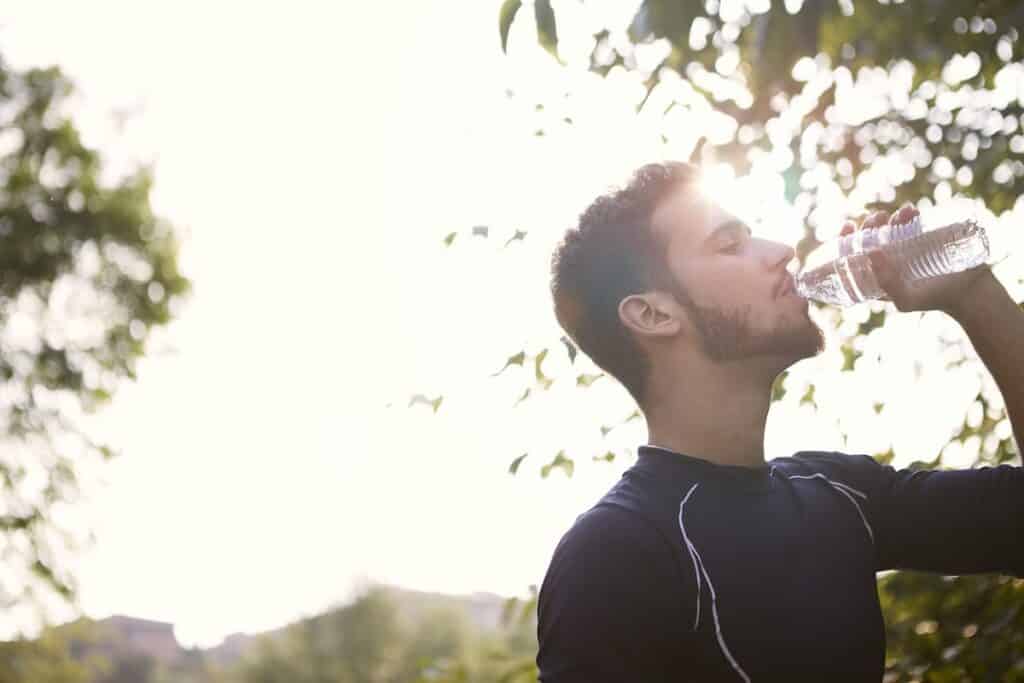 In today’s news, according to a National Institutes of Health study that was released Monday in the journal eBioMedicine, drinking enough water is linked to a significantly lower chance of having chronic diseases, a lower risk of dying young, or a lower risk of being biologically older than your chronological age. Additionally, according to research, the Japanese practice of “forest bathing,” or shinrin-yoku, has several advantages for both physical and emotional health. Also, increased exercise tops the list of America’s most popular New Year’s resolutions for 2023, according to new statistics.

You may know that staying hydrated helps regulate temperature and maintain skin health.

“The results show that proper hydration may slow down aging and prolong a disease-free life,” said study author Natalia Dmitrieva, a researcher in the Laboratory of Cardiovascular Regenerative Medicine at the National Heart, Lung, and Blood Institute, a part of NIH, in a news release.

Based on mouse research, the scientists felt proper hydration would slow aging. According to the latest study, lifelong water restriction increased mice’s serum sodium by 5 millimoles per liter and decreased their lifespan by six months, equivalent to 15 years in humans. Less fluid intake raises serum sodium.

The Atherosclerosis Risk in Communities project, or ARIC, collected health data from 11,255 Black and White adults over 30 years. Adults with serum sodium levels at the upper end of the normal range (135 to 146 mEq/L) had worse health outcomes than those at the lower end. The study began in 1987 when participants were in their 40s or 50s, and the average age at the final examination was 76.

Adults with values above 142 mEq/L were 10% to 15% more likely to be biologically older than their chronological age than those in the 137–142 range. Heart failure, stroke, atrial fibrillation, peripheral artery disease, chronic lung disease, diabetes, and dementia were 64% more likely among faster-aging adults.

People with levels above 144 mEq/L were 50% more likely to be biologically older and 21% more likely to die early. However, chronic disease risk was lowest in adults with blood sodium levels between 138 and 140 mEq/L. The study didn’t record water intake.

“This study adds observational evidence that reinforces the potential long-term benefits of improved hydration on reductions in long-term health outcomes, including mortality,” said Dr. Howard Sesso, an associate professor of medicine at Harvard Medical School and associate epidemiologist at Brigham and Women’s Hospital in Boston, via email. The study excluded Sesso.

However, “it would have been excellent to combine their definition of hydration, based on blood salt levels exclusively, with real fluid intake data from the ARIC cohort,” Sesso said.

The authors claimed this is consistent with prior studies of higher mortality and cardiovascular disease in persons with low regular sodium levels due to electrolyte disorders.

The authors acknowledged the long-term study did not prove a causal association between serum salt levels and these health consequences. They said more research is needed, but the findings can help clinicians identify and advise at-risk individuals.

Dmitrieva advised evaluating fluid consumption for those with blood salt over 142 mEq/L.

The study did not address accelerated aging, which Sesso called “a difficult concept that we are just starting to understand.”

“Two main reasons,” Sesso stated. The study relied on a mixture of 15 markers for accelerated aging, however this is one of many classifications for which there is no consensus. Second, their data on hydration and accelerated aging was a “snapshot,” therefore we cannot determine cause and effect.

According to multiple studies mentioned by the new study, half of the world’s population doesn’t drink enough water.

Dmitrieva stated in a release that this might have a global impact. “Decreased bodily water content is the most common factor that increases serum sodium,” which suggests that staying hydrated may slow aging and prevent or delay chronic disease.

“The most impressive discovery is that this risk (for chronic diseases and aging) is present even in persons who have serum sodium levels that are on the upper end of the ‘normal range,’” stated Dr. Richard Johnson, University of Colorado School of Medicine professor, via email. The study was not his.

“This questions what is normal and reinforces the idea that as a population we are probably not drinking enough water.”

According to the Cleveland Clinic, water makes up more than half of your body and helps digest food, create hormones and neurotransmitters, and provide oxygen.

Health conditions should consult their doctor regarding fluid consumption.

“The goal is to ensure patients are taking in enough fluids, while analyzing factors, including medications, that may lead to fluid loss,” said study coauthor Dr. Manfred Boehm, director of the Laboratory of Cardiovascular Regenerative Medicine, in a news release. “Doctors may also need to defer to a patient’s present treatment plan, such as reducing heart failure fluid intake.”

You may need help incorporating hydration into your daily routine if you struggle. Drink water before your morning coffee or keep a glass of water by your bed. Dr. B.J. Fogg, creator and director of the Stanford University Behavior Design Lab, suggested to tie your hydration habit to a site you visit several times a day.

Mental and physical health can both benefit from “forest bathing.”

Forest bathing, or simply going outside and taking in some nature, has been shown in studies to be a mood booster.

Researchers from Stanford University examined MRI data and discovered that spending time in nature actually reduces activity in the part of the brain responsible for depression and anxiety, according to Dr. Suzanne Bartlett Hackenmiller, chief medical adviser for the app AllTrails, an outdoor hiking and recreation app to help find trails.

According to Bartlett Hackenmiller, “they’ve found that 90 minutes of walking in a natural setting, participants reported less of what we call rumination – just that cycle of spinning negative, stressful thoughts – than persons who walked in an urban setting.”

Numerous research that support the advantages of spending time in nature were cited by the speaker. One study found that because exercising outside is more fun, people are more likely to continue doing it, which helps them achieve their fitness goals.

Aside from improving memory and immunological function, nature walks have also been related to reduced levels of stress hormones, blood pressure, and the chance of developing cancer.

According to Praznik, “our integrated navigator helps customers make sure they’re never going to miss a turn and they can follow along the route.” Meaghan Praznik, director of communications for AllTrails, added: “We also have printable maps, which provide customers a backup map, or even the ability to download offline maps in case you are to lose connectivity.”

According to additional research, spending time outside with friends is much healthier than walking by yourself.

Additionally, they demonstrate how residing in a region with greater “surrounding greenness” can influence the genes related to cancers, metabolic disease, and mental health disorders.

New Year’s resolutions are difficult, but there are strategies to succeed.

413 American people aged 18 to 89 provided responses for the Statista Global Consumer Survey. If necessary, respondents were permitted to select more than one resolution.

The COVID-19 pandemic may have caused the following resolutions. During the pandemic, many Americans couldn’t afford to visit family. Spending more time with family and friends (37%), and saving money (39%), placed three and four, respectively.

Supported people achieved their aims, researchers found. 55% maintained their resolutions after one year. Approach-oriented goals outperformed avoidance-oriented goals. In 2016, only 9% of Americans kept their New Year’s resolutions, yet one study revealed success.

“Rephrasing your resolution often works. If you want to reduce weight, saying “I will eat fruit multiple times a day” instead of “I will quit eating sweets” will probably work better. You replace sweets with healthier options, likely losing weight and keeping your resolution. Behaviors can be replaced, but not erased.” Carlbring

Lack of personal control, stress, and negative mood led to New Year’s resolve failures, according to a University of Scranton study. New Year’s resolutions are hard, but they can work.

Journaling for resolution progress was new in the Swedish study. New Year’s resolutions had the highest success rate in this study, so writing them down can help.

Though tough, resolutions are up to the individual. Limiting distractions and practicing saying “no” will assist in the new year.

New Year’s resolutions are hard to keep without family, friends, or internet support.

Goal-setting is hard. New Year’s resolutions may fail, but improving is most important. Stay positive in 2023 to succeed with those resolutions.

Overall, a National Institutes of Health study released in eBioMedicine found that drinking adequate water reduces the risk of chronic diseases, early death, and biological aging. The National Academy of Medicine (previously the Institute of Medicine) advises women should drink 2.7 liters (91 ounces) and males 3.7 liters (125 ounces). Fruits, vegetables, and soups count as fluids. Since the average water intake ratio of fluids to foods is 80:20, women should drink 9 cups and males 12 1/2 cups daily.

Furthermore, studies have shown that forest bathing, or simply being outside and taking in some nature, can elevate mood. According to Dr. Suzanne Bartlett Hackenmiller, chief medical adviser for the AllTrails app, an outdoor hiking and recreation app to help find trails, Stanford researchers analyzed MRI data and discovered that spending time in nature actually decreases activity in the part of the brain responsible for depression and anxiety.

Finally, 413 American people between the ages of 18 and 89 responded to the Statista Global Consumer Survey.  Exercise more ranked first (52%), then healthy eating (50%) and weight loss (40%) as the top three resolutions. These three are related to the ongoing obesity epidemic in the United States. Interestingly, the next two resolutions appear to be a result of the COVID-19 pandemic. During the pandemic, a lot of Americans experienced financial hardship and missed visits with loved ones. Spending more time with friends and family was placed fourth, with 37%, and saving more money was ranked third.